How to save money adjusting the pumping pressure to the pivot’s pressure needs.

When we tackle improving the efficiency of an irrigation facility, or any other process, it is key to focus on the objective of reducing the waste taking place at each moment. By waste. we mean all consumption that does not enhance the added value of the production and which, moreover, is unnecessary. The quality and quantity of the final product will be the same if we do not incur that cost. It is also important to realize that the level of waste of a resource need doesn’t remain constant over time, so that dynamic adjustment is necessary to reduce the total cost to a minimum. A “very good initial adjustment” and the hope it will remain optimal throughout the time of operation is not enough.

Speaking of irrigation, there are two resources which are wasted to a greater or lesser extent, and which are closely related: the amount of water applied and the pressure with which it is applied. As all of us know, the two parameters converge upon a single cost: energy. In this article, I’m going to focus on how to ensure that the water pressure is what is strictly necessary at each moment, not one kg/cm2 higher or lower than that strictly necessary to yield uniform irrigation.

For installations that do not yet have a VFD (Variable Frequency Driver), everything will depend on how well the design fits the conditions of use at each moment. Other that opening/closing the gate valve, no adjustment which could reduce the power consumed by the pump when demand is below its nominal rating is possible. In practice, this regulation does not offer significant improvements.

Once we decide to take measures to reduce energy consumption to the minimum, installing a VFD to govern the operational regime, and thus the power consumption of the pump, becomes indispensable. A sensor installed at the pump outlet feeds the water pressure back to the VFD, so that it is possible to establish a pressure setpoint which the VFD will ensure remains stable. This mechanism already produces savings by adjusting consumption to the flow demanded at each moment: higher flow demand makes the pipe pressure fall, so the pump increases its rate to offset this, and vice versa. The above is good enough for estates without major differences in elevation, and always watering with the same flow; for instance: a farm with several pivots always functioning simultaneously and height differences of less than 5 meters. There is one detail which cannot pass unnoticed: the pressure setpoint is fixed for the case in which all the pivots and sectors of solid set which can be supplied simultaneously by the pump are watering at the same time, to offset the fall in network pressure caused by this maximum flow. In practice, it commonly happens that not all the pivots and sectors are always watering simultaneously, while the pressure setpoint in the pump does remain constant.

Let us think now of a more realistic scenario: a farm with height differences of 20 meters or more, several pivots irrigating at different moments and certain sectors of solid set at different heights. With a VFD, normal practice is to define a pressure setpoint which guarantees uniform irrigation at the highest point of the farm and covering the case in which all the pivots/sectors which can be simultaneously supplied are watering. In the majority of cases, this pressure will remain constant year after year. In this example, it is easy to visualize how, depending on whether higher or lower zones, and more or fewer pivots or sectors of solid set,

are being worked simultaneously, much of the time, a pressure higher than that strictly necessary is being delivered. Well, if we sketch a horizontal line which depicts the fixed pressure reaching the end of a pivot from the pump, and another dashed line underneath showing how many meters below the maximum elevation in the field we are irrigating at each moment, and shade in the area between these two lines, then this shaded area is the wasted pressure=energy=cost (see graphic). In response to this, some people have told me that they have pressure regulators on their network and that this is sufficient. Not true. Once the pump has generated the pressure, we have already consumed the electricity, and however much we reduce pressure afterward by 3 kg/cm2, the cost has already been incurred.

The solution to what has been described above is simple. The iControl Total pump controllers, in addition to looking after supervision, remote control and programming pumping and fertigation, incorporate 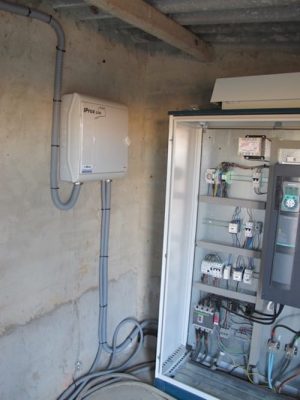 a continuous adjustment functionality into the pump pressure setpoint, and this is what makes the difference: this setting is fed by the instantaneous pressures measured by the sensors on the last span of each pivot and the valves for the solid set sectors (instead of using only the pump outlet pressure, as usual). This means that at some moments, pump energy consumption will be that for the maximum pressure set, namely while irrigating the highest areas, and the rest of the time it is supplying one, two, three or more kg/cm2 below that fixed setpoint. The amount of the saving depends fundamentally on the differences in elevation between different parts of the ground and the dynamic level of the well. Thanks to this functionality, on real facilities, iControl Total controllers are saving between 10% and 30% of the energy consumption, which in the majority of cases, allows the investment to be recouped in a few months.